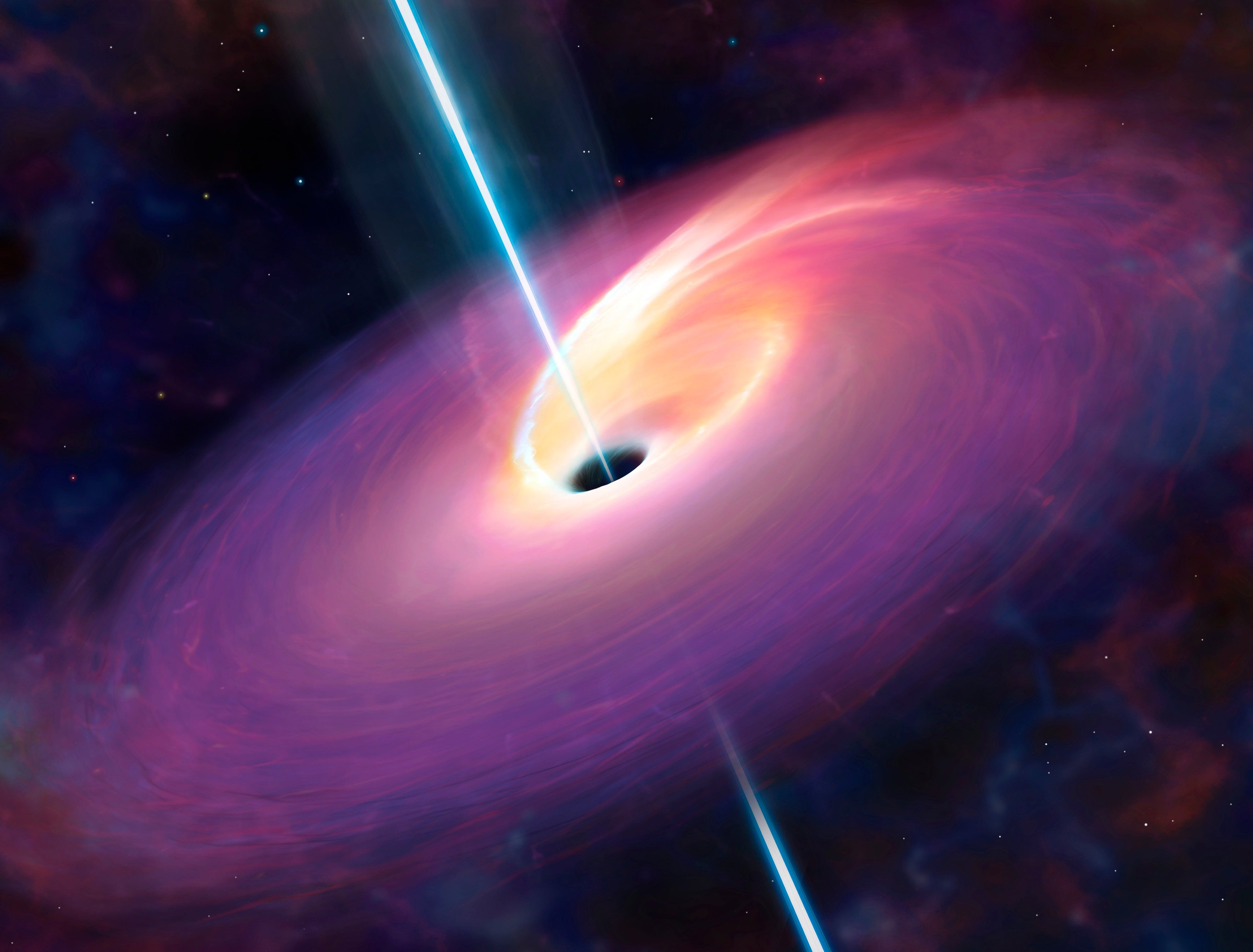 In 1939, Albert Einstein published a paper in Annals of Mathematics, arguing that black holes do not exist in nature. A quarter of a century later, Maarten Schmidt discovered quasars as powerful sources of light at cosmological distances. These enigmatic point-like sources were explained in the mid-1960s by Yakov Zel’dovich in the East and Ed Salpeter in the West as supermassive black holes that are fed with gas from their host galaxies. When gas flows towards the black hole, it swirls like water going down the drain. As the gas approaches a fraction of the speed of light at the innermost stable circular orbit (ISCO) around the black hole, it heats-up by rubbing against itself through turbulent viscosity.

Consequently, its accretion disk glows brightly, radiating away about a tenth of its rest mass and exceeding by orders of magnitude the total luminosity from stars in its host galaxy. High feeding rates make quasars visible all the way out to the edge of the visible Universe. Decades later, astronomers found that almost every galaxy hosts a supermassive black hole at its center, which is starved most of the time but bursts sporadically for merely tens of millions of years during each burst. The quasars resemble a baby that tends to remove food off the dining table as soon as it is fed by virtue of becoming too energetic.

This year, the Nobel Prize in Physics was awarded to Andrea Ghez and Reinhard Genzel for providing conclusive evidence that a black hole, albeit starved at the present time, lurks also at the center of our own Milky Way galaxy. This monster, weighing four million Suns, is dormant right now, glowing as the feeble radio source Sagittarius A* (abbreviated SgrA*), which is a billion times fainter than it would have been if it was fed as generously as a quasar.

Even though SgrA* is dim right now, we have clues that it must have experienced episodes of vigorous feeding in the past. This is not a surprise, given that a gas cloud approaching the Galactic center or a star passing within ten times the horizon scale of SgrA* (which translates to roughly the Earth-Sun separation), would get spaghettified by the strong gravitational tide there and turn into a stream of gas that triggers a quasar-like flare.

The “smoking gun” evidence for recent feeding episodes of SgrA* by massive quantities of gas is that young stars around SgrA* orbit in preferred planes. This implies that these stars formed out of planar gas disks, just like the planets in the Solar system plane or the stars in the Milky Way disk. Since the age of the stars near SgrA* is less than a percent of the age of the Milky Way galaxy, major accretion episodes from disruption of gas clouds must have occurred at least a hundred of times around SgrA*, based on the Copernican principle that the present time is not special. Indeed, a pair of giant blobs of hot gas, called the Fermi bubbles, are observed to emanate from the Galactic center along the rotation axis of the Milky Way, implying a recent accretion episode around SgrA* that could have powered them. Theoretical calculations imply that in addition to disruption of massive gas clouds, individual stars are also scattered into the vicinity of the black hole and get tidally disrupted once every ten thousand years. The intense feeding from the resulting debris streams could lead to the brightest flares from SgrA*. Such tidal disruption events of stars are indeed observed in other galaxies at the expected rate.

Would the resulting flares of SgrA* have any implications for life on Earth? In principle, they could, since they carry damaging X-ray and Ultraviolet (XUV) radiation. In collaboration with my former postdoc, John Forbes, we showed in 2018 that the XUV radiation emitted during such flares has the capacity to evaporate the atmospheres of Mars or Earth if the Solar system had only been ten times closer to the center of the Milky Way. But even at larger distances, the XUV radiation could suppress the growth of complex life, creating an effect similar to stepping on a lawn so frequently that you inhibit its growth.

At the current location of the Sun, terrestrial life is safe from XUV flares of SgrA*. However, recent studies indicate that the birthplace of the Sun may have been significantly closer to the Galactic center and that the Sun migrated to its current location through gravitational kicks. The exposure to past XUV flares from SgrA* at closer distances, could have harmed complex life during the early evolution of the Earth. This might explain why the oxygen level in the Earth’s atmosphere rose to its currently high level only after two billion years, perhaps only after the Earth was sufficiently far away from SgrA*. In collaboration with Manasvi Lingam, I am currently exploring this possible connection between terrestrial life and the migration of the Sun away from the Galactic center.

Traditionally, the Sun was thought to be the only astronomical source of light that affected life on Earth. But it is also possible that the black hole, SgrA* played an important role in shaping the history of terrestrial life. A surprising realization of this sort is similar to figuring out that a stranger might have impacted your family history before you were born. If a link between SgrA* and terrestrial life can be established, then this supermassive black hole might trigger a second Nobel Prize.

How Those Bogus Reports on ‘Ineffective’ Neck Gaiters Got Started

Share this on WhatsApp In early August, there was a lot of hubbub around a study that purportedly showed that wearing a neck gaiter, the sleeve-like face covering popular especially among runners, might be worse at stemming the spread of COVID-19 than not wearing a mask at all. Headlines popped up spreading the news, sparking […]

A Sustainable Alternative to Blanket Lockdowns

Share this on WhatsApp As cities around the world—including Auckland, Jakarta, Melbourne and Tel Aviv—have entered seemingly endless cycles of lockdowns and viral resurgences, there is a pressing need to reassess this lockdown strategy given the economic, social and psychological damage it wreaks.  Blanket lockdowns may be effective, but they are blunt and brutal tools. […]

Share this on WhatsApp Credit: Scientific American MIND September October 2020 Advertisement It’s one of my favorite events in the science world: the annual Art of Neuroscience contest held by the Netherlands Institute for Neuroscience. Now in its 10th year, the competition looks a lot different than it did even five years ago. Yes, many […]

How Heavy is the Universe? Conflicting Answers Hint at New Physics

Priyanka Chopra Jonas joins hands to raise money for the education of the leading pair of the film Bittu : Bollywood News

StayWell Holdings gear up for a robust expansion

Posted on January 11, 2023 Author Admin
We use cookies on our website to give you the most relevant experience by remembering your preferences and repeat visits. By clicking “Accept”, you consent to the use of ALL the cookies.
Cookie settingsACCEPTREJECT
Manage consent