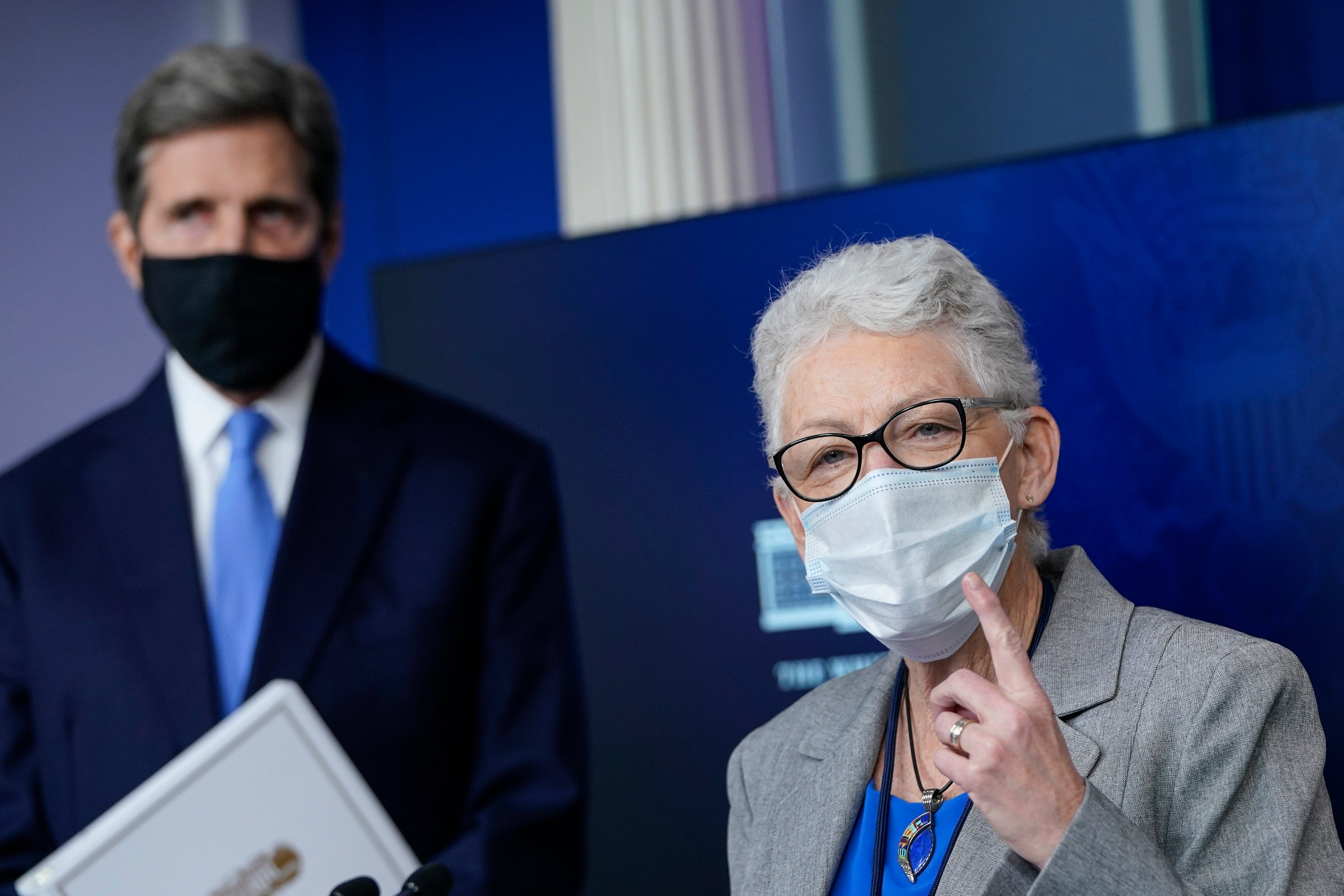 President Biden launched one of the strongest climate policy platforms in U.S. history with a series of executive orders yesterday.

The moves made addressing climate change a national priority on par with battling the pandemic and revitalizing the economy.

“It’s about workers building our economy back better than before,” Biden said before signing the order. “It’s a whole-of-government approach to put climate change at the center of our domestic, national security and foreign policy. It’s advancing conservation, revitalizing communities and cities and on the farmlands, and securing environmental justice.”

“Climate Day” at the White House made headlines for its big ticket items. But notable pieces of the executive order received less coverage, including efforts to prepare the federal government for climate disasters, create union jobs by cleaning up pollution and restrict U.S. spending on fossil fuel projects abroad.

Here are five actions that flew under the radar:

Biden took a step toward U.S. membership in this global climate deal, which phases down a class of climate superpollutant known as hydrofluorocarbons (HFCs).

In 2016, Gina McCarthy, as EPA administrator, and then-Secretary of State John Kerry traveled to the Rwandan capital to help land the deal, which would dramatically reduce the production of HFCs used in cooling and replace them with climate-friendlier alternatives, sometimes made by U.S. companies.

McCarthy and Kerry are now Biden’s top climate advisers. And yesterday’s order directs the State Department to get ready to submit the Kigali Amendment to the Senate for its advice and consent.

Ratification would require a two-thirds vote—a heavy lift in a narrowly divided Senate. But the amendment is backed by U.S. business and manufacturing interests and has some bipartisan appeal.

Fifteen Republican votes would be needed for treaty ratification in the likely event that all Democrats and Vice President Kamala Harris voted in favor.

Paul Bledsoe, a former Clinton White House climate adviser now with the Progressive Policy Institute, noted that both Biden and Kerry are former chairmen of the Senate Foreign Relations Committee, which has jurisdiction over treaties submitted ahead of ratification.

They wouldn’t have sent Kigali to Capitol Hill if it had no chance of passing, he said.

“This could be the beginning of a more collaborative relationship on climate policy between the administration and the Senate,” Bledsoe added.

Kigali would be the first climate-related treaty the Senate has voted on since 1992, when it approved the United Nations Framework Convention on Climate Change.

The executive order makes it harder to permit fossil fuel infrastructure, such as pipelines, while making it easier for renewable energy projects like transmission lines.

The order requires the government to take into account the climate costs of an infrastructure project before approving permits. It directs the chair of the Council on Environmental Quality and the director of the Office of Management and Budget to “ensure that Federal infrastructure investment reduces climate pollution.”

That is a clear signal that the construction of pipelines could come to a grinding halt during the Biden administration. Activists have long targeted pipelines with demonstrations and public awareness campaigns.

What’s more, McCarthy will have a role in the process. CEQ and OMB will report to the national climate adviser on issues related to siting and permitting, including those already in progress under the auspices of the Federal Permitting Improvement Steering Council, the order states.

McCarthy’s office will identify steps to “accelerate the deployment of clean energy and transmission projects in an environmentally stable manner.”

The order directs NOAA and the Federal Emergency Management Agency to study how the government can “expand and improve climate forecast capabilities and information products for the public.”

The White House Office of Science and Technology Policy is also involved.

The order further directs federal agencies to make plans for increasing the resilience of their facilities and operations to climate change. Each agency must have a federal action plan within 120 days that describes its climate vulnerabilities and how it can use the government’s procurement process to increase energy and water efficiency.

In addition, agencies will be tasked with protecting the nation’s supply chains against climate risks and disruptions that could affect manufacturing or consumer access to goods and services.

The order also explores the possibility of creating a consolidated federal geographic mapping service that would make it easier for the public to access climate-related information for their region.

Communities with energy production often have higher rates of pollution. Biden’s executive order would create a jobs plan around the cleanup of those sites, including plugging leaks in oil and gas wells and reclaiming abandoned mines and their surroundings.

Biden and other officials frequently described yesterday’s order as a jobs plan. Biden’s order says it would create millions of jobs oriented toward the nation’s transition to clean energy. They pointed to growing employment in the solar and wind industries, electric vehicle manufacturing, and the construction of clean technology infrastructure.

The order also purports to create another class of jobs for communities that have seen coal mines or power plants close, or where oil and gas wells have gone dry.

“That has great impact on climate but also will keep an opportunity for those—for those individual workers to have work in their own communities,” she told reporters yesterday. “We’re not going to ask people to go from the middle of Ohio or Pennsylvania and ship out to the coast to have solar jobs. You know, solar jobs will be everywhere, but we need to put people to work in their own communities.”

It directs the secretary of State to work with the Treasury and Energy secretaries, the U.S. Export-Import Bank, and the U.S. International Development Finance Corp. to end international financing of fossil fuel projects abroad while boosting sustainable development and green initiatives.

It also includes an effort to intensify international collaborations on green energy projects.

The shift could be seismic in its narrow corner of the finance market. In the last five years, the International Development Finance Corp. has spent $4 billion on fossil fuel projects, according to the environmental advocacy group Friends of the Earth. The Export-Import Bank provided $5 billion over that same period, the group said.

Many of those projects were in developing countries where environmental regulations are lax or nonexistent.

“It is high time that EXIM, DFC and the rest of the U.S. government stop destroying local communities and the environment by propping up fossil fuel projects abroad,” Friends of the Earth spokeswoman Kate DeAngelis said in a statement. “We look forward to an immediate end to this dirty financing.”

Share this on WhatsApp Post Views: 0 A coalition of oil and gas companies announced a new emissions target yesterday to reduce the “carbon intensity” of their operations over the next five years, but critics said the plan didn’t go far enough. The Oil and Gas Climate Initiative (OGCI), a coalition aiming to “accelerate the […]

Share this on WhatsApp Post Views: 1 Rosey has lived with bulimia for more than a decade. The 31-year-old resident of Melbourne, Australia, started therapy for her eating disorder six years ago. Although she says she had never considered herself “cured,” she had reached a point in her recovery that felt hopeful and manageable. Then […]

Share this on WhatsApp Post Views: 0 Originally published in August 1863 Credit: Scientific American Advertisement “If the sun were composed of coal, it would last at the present rate only 5,000 years. The sun, in all probability, is not a burning, but an incandescent, body. Its light is rather that of a glowing molten […]

Posted on April 18, 2020 Author
We use cookies on our website to give you the most relevant experience by remembering your preferences and repeat visits. By clicking “Accept”, you consent to the use of ALL the cookies.
Cookie settingsACCEPTREJECT
Manage consent