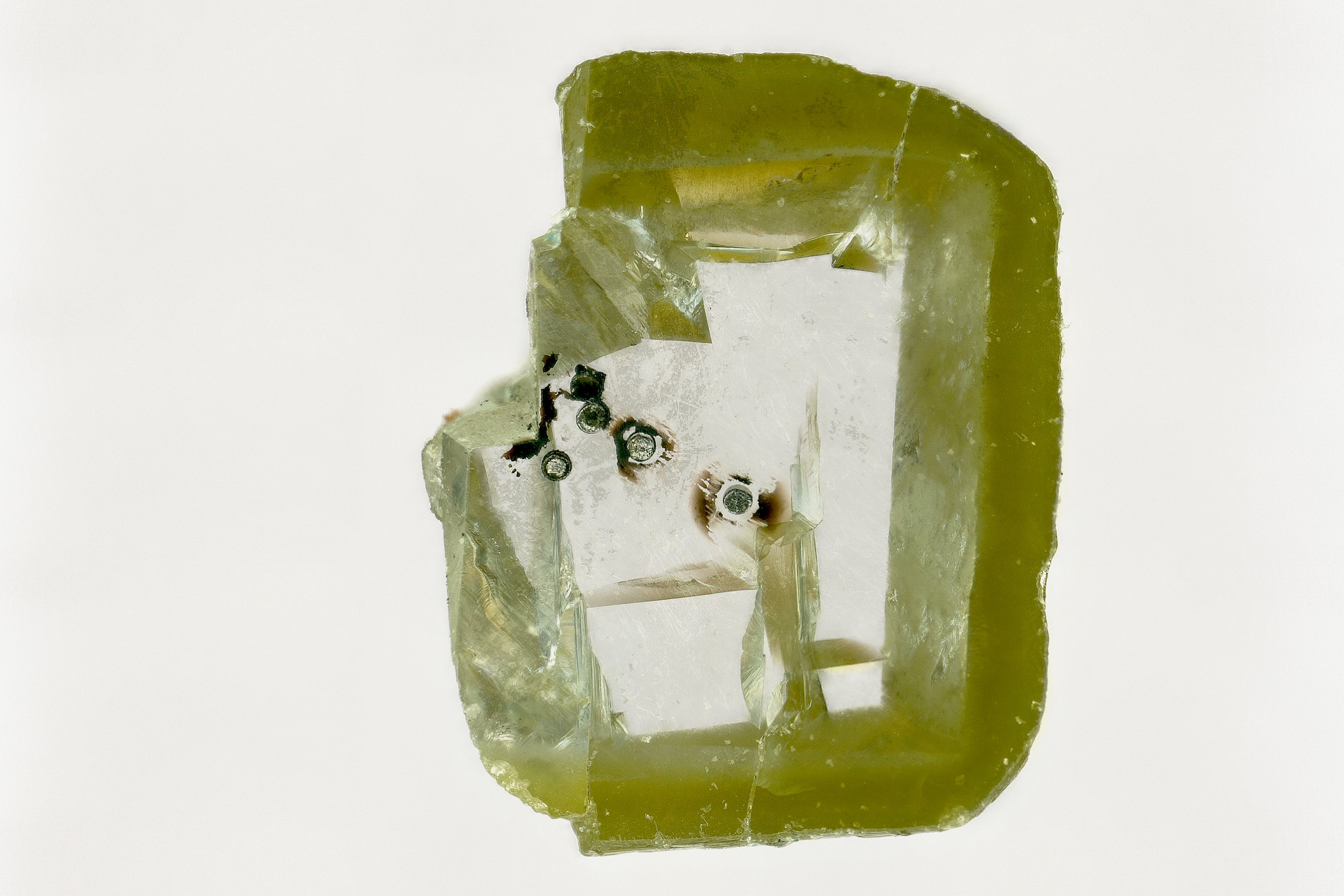 A diamond that formed deep in the earth’s mantle contains a mineral never seen before in nature. The discovery is a rare glimpse into the deep mantle and may help reveal new information about the structure of the planet at depths of more than 660 kilometers. This, in turn, can help geologists better understand how the mantle controls the earth’s plate tectonics.

The mineral, calcium silicate perovskite, only forms under the incredibly high pressures that occur deep in the earth. The newly identified sample likely formed between 660 and 900 km below the planet’s surface, says mineralogist Oliver Tschauner of the University of Nevada, Las Vegas. Though the mineral had previously been synthesized in the laboratory using 20 gigapascals of pressure (almost 200,000 times atmospheric pressure), it had immediately reverted to a different form when it was removed from that artificial high-pressure environment. So researchers had assumed it would be impossible to retrieve naturally occurring calcium silicate perovskite from the mantle. “The chances, we thought, of finding it were so low that we never really actively looked for it,” Tschauner says.

So it was a surprise when he and his colleagues, analyzing imperfections in a diamond from Orapa, Botswana, found three minuscule specks of calcium silicate perovskite. Calcium silicate is found in other forms, including wollastonite in the crust and breyite in the middle and lower regions of the mantle. But this version had a telltale cubic crystal structure that marked it as different from those versions of the mineral. Tschauner and his colleagues named the new mineral “davemaoite,” after geologist Ho-Kwang “Dave” Mao, who carried out some of the pioneering experiments in using diamonds as presses to experimentally generate mantlelike pressures on the earth’s surface. They announced the discovery on Thursday in Science.

Geoscientists can get a decent idea of the composition of the earth’s mantle based on what is present in the crust because the rocks in the mantle and crust are connected: tectonics move rocks and minerals up and down between the layers over millions of years. The minerals morph and change as they leave the high pressure and scorching temperatures of the lower mantle, however. Diamonds are the only direct window into this region because they do not morph. They form at least 150 km below the surface, with some originating as deep as 1,000 km. Diamonds’ crystalline structure is made of pure carbon, but they often scoop up tiny bits of their surroundings as they form. Because diamonds are incredibly hard, they can seal in these microscopic “inclusions” under very high pressure—even as the diamond ascends to the crust and is plucked by a miner. “The diamond doesn’t let anything in or out,” says Oded Navon, a geologist who studies diamonds and the deep mantle at the Hebrew University in Jerusalem but was not involved with the identification of davemaoite. “It’s really a perfect closed box.”

The amount of davemaoite in the Botswanan diamond was extremely small, with each of three specks measuring only about five to 10 micrometers wide. Tschauner and his colleagues used x-rays to analyze the inclusions and then drilled into two of them with a laser, vaporizing the material and sending it through a device called a mass spectrometer to determine what elements made up the samples. They found the davemaoite contained a surprisingly high amount of potassium; this may have helped stabilize the deep-mantle mineral during its residence on the earth’s surface, Tschauner says. The high potassium level also hints at a global “conveyer belt” that circulates elements between the crust and deep mantle, says Yingwei Fei, a geochemist at the Carnegie Institution for Science, who penned an editorial accompanying the new study in Science but was not involved in the research. Potassium is not a major presence in the deep mantle, yet it likely travels there in slabs of crust in subduction zones, where one tectonic plate is pushed under another.

One form of potassium is radioactive, Tschauner says, and davemaoite also contains small amounts of radioactive elements such as thorium and uranium, which are not taken up easily by the other minerals that make up the lower mantle. This is important because the decay of these elements is responsible for about a third of the heat generated in the earth’s interior, Tschauner says. Inferring from mineral concentrations closer to the earth’s surface, geoscientists suspect that davemaoite makes up about 5 to 7 percent of the lower mantle. But the mineral may not be evenly distributed, Tschauner adds. Because of this, pockets of uranium- and thorium-rich davemaoite may dominate in places—possibly explaining why some parts of the mantle are hotter than others. These hotspots help drive circulation in the mantle, which drives plate tectonics, so small variations in mineral concentrations could add up to big impacts on our planet’s surface. Such variations may also reveal more about the connections between the earth’s crust and its lower mantle, perhaps helping to explain how elements travel between them. This is an area of study that is only just becoming possible, Tschauner says. “Having the real minerals from the lower mantle still present is a fairly new direction for this type of research,” he adds.

Share this on WhatsApp Post Views: 0 In 1952, at Los Alamos Scientific Laboratory, theoretical physicists Enrico Fermi, John Pasta and Stanislaw Ulam brainstormed ways to use the MANIAC, one of the world’s first supercomputers, to solve scientific problems. At the time, problems were solved by performing either laboratory experiments or mathematical calculations by hand. […]

How Nature Helps Body and Soul

Share this on WhatsApp Post Views: 2 This is Scientific American’s Science Talk, posted on June 27, 2020. I’m Steve Mirsky. On this episode: WILLIAMS CLIP That’s Florence Wiliams. She’s a journalist and the author of the 2017 book The Nature Fix: Why Nature Makes Us Happier, Healthier and More Creative. America’s professor and author […]

Why Oxytocin Is Incredible and How to Get More of It

Share this on WhatsApp Post Views: 0 What is oxytocin? You know those warm and fuzzy feelings you get when you cuddle a puppy, hug your friend, or kiss your partner? That’s oxytocin at work. You may already have heard of oxytocin—what people have called the love hormone, cuddle hormone, or even the moral molecule. […]

COVID-19 Stop the Spread of Germs

Heat and Racism Threaten Birth Outcomes for Women of Color

Shakti Kapoor says he is not aware if Shraddha Kapoor and Rohan Shrestha are in a serious relationship : Bollywood News

Posted on January 29, 2021 Author
We use cookies on our website to give you the most relevant experience by remembering your preferences and repeat visits. By clicking “Accept”, you consent to the use of ALL the cookies.
Cookie settingsACCEPTREJECT
Manage consent